After my recent experience having skin prick tests for various suspected allergens I would advise anyone who is struggling to identify what they are allergic to to give it a go. Speak to your doctor and request a referral to your local allergy clinic. Be warned, waiting lists can be very long; I waited over six months for my first appointment, but once you get there subsequent appointments are much more regular. 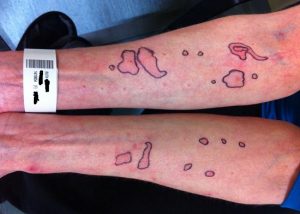 I arrived early and was greeted warmly by a very friendly nurse with red curly hair and was ushered to a comfy seat where I began to contemplate what lay ahead. The letter had asked me to bring along sample foods that give me a problem so my shopping bag was full of nasties: celery, coriander, tomatoes, pine nuts, soya sauce etc. All wrapped in individual bags to avoid cross contamination! You don’t need to bring milk, wheat, egg or nuts as the clinic have their own samples.

I was feeling quite optimistic and interested in what this visit might hold. Guidance and reintroduction of said nasties was high on my agenda. I had yet to begin trying to eat egg again since my last anaphylactic attack – caused after eating smoked salmon and scrambled eggs in a local pub. I ended up in A&E and had to use my EpiPen for the first time; a very terrifying experience. The doctors thought it could have been caused by loosely cooked egg and I was advised to eat a hard boiled egg and see what happened but the prospect of this little experiment filled me with dread.

I had been planning to try egg for weeks but kept putting it off; it had to be a day when I was not alone and had someone with me to help and act fast in case anything happened.

The prick tests were carried out by first cleaning the area, then placing a drop of liquid with the allergen suspended in it onto the skin, which is then pricked with a tiny needle and the watery substance then wiped off. Each separate allergen was marked with biro with its initial e.g. w = walnuts, p = peanuts, a = almonds and eight substances in total were tested: walnuts, peanuts, almonds, eggs, dairy, yeast, pine nuts and cashew nuts.

Twenty minutes later and some of the tests had risen into ugly hard watery filled nettle rash reactions which were very itchy. Not surprisingly I had a strong reaction to peanuts, cashew nuts and almonds; I knew the nuts would be a problem but didn’t expect to discover that I now have an actual confirmed allergy to dairy too. I had always suspected that I had intolerance but the reaction for dairy was stronger than those to the nuts.

Pine nuts, yeast and eggs were all OK so I now knew that those scrambled eggs most definitely didn’t cause anaphylaxis, but the butter and milk they were cooked with were confirmed as the culprits. Since I had some quite strong reactions, I was advised to leave the other foods to test on another day. These tests only identify real allergic reactions, they do not show mild or intolerant type reactions as these can take hours or even days for the body to react.

I have also found a very useful explanation of how skin prick tests work on the Allergy UK website.

With my confirmed list of allergies I was referred to Tanya Wright, Dietician at Amersham Dermatology department. She has opened up a whole new world to me. With her help I have now successfully begun to reintroduce foods which cause an intolerant reaction one by one, and am also discovering a whole host of different foods that I could be eating. She has a library of food packets and samples in her room which are dairy free, soya free, gluten free etc.; there are so many more foods out there that I can eat and I can’t wait to try them all. My mouth was watering with anticipation. Find out more about my experience reintroducing foods in my next blog.