Lupins are quite common in most English gardens, recognisable for their tall, elegant stems with many tiny clustered and tightly curled flowers. 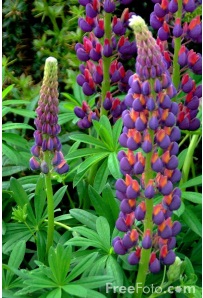 They are related to the legume family e.g. peanuts, peas, lentils and beans. The seeds from some types of lupin can be used in foods such as seeded bread and can also be ground to make lupin flour, which is used sometimes in foods such as pastries.

In the UK, Lupin allergy is still quite rare, but in the rest of Europe Lupin Flour is used quite widely in bread, cakes and pastries; cases of Lupin allergy in mainland Europe are far more widely recognised than in the UK and can cause very severe reactions such as anaphylaxis. There have been very few confirmed reports of lupin allergy in the UK so far and due the relationship with the legume family there is a risk that people who react to Lupin may also react to peanuts, peas etc.

Food labelling rules require pre-packed food sold in the UK or the rest of the European Union (EU) to show clearly on the label if it contains lupin (or if one of its ingredients contains it).

Because lupin flour is used more widely in mainland Europe, people who are allergic to peanuts or lupin should be especially careful when staying in other European countries or eating pastries etc. brought back from there.

Foods Matter have an interesting article about Lupin allergy, The hidden menace of Lupin Flour. You can also visit the Lupin index on the Foods Matter for research reports, foods free from Lupin flour and a funny cartoon here.

If you suspect that you may have an allergy to Lupin, the only real way of finding out for sure is by cutting out the food you suspect of causing the reaction, which you know to contain Lupin, for a month or two and then trying a small amount again. You can test it by rubbing a small amount on your lip or skin to see if that causes a reaction. If you are worried you could have a real life threatening allergy you should ask your doctor to refer you for skin prick tests.

This could cause you some difficulty as you’ll be asked to bring along a sample of the food you wish to have tested. Most UK allergy clinics and hospitals wont have Lupin flour in their stock of allergens to use for testing so you may need to get hold of some, as a friend of mine discovered recently when she had similar tests done. My clever friend Jane managed to track down some Lupin Flour from an Australian company’s website, “Wheat Free World” at: www.wheatfreeworld.com.au. Lola Workman of “Wheat Free World” kindly sent my friend a small bag of Lupin flour to use for testing, she was confirmed with a severe Lupin allergy as her arm swelled up a treat, and the hospital purchased the flour from her for their stocks, so it was a win win situation all round.

Jane discovered she had a problem when becoming nauseous and very unwell after eating a fresh baked seeded honey loaf from the supermarket. After much research into the ingredients (The German manufacturers were very helpful, even supplying a bag of their flour mix) and eliminating them one by one, she began to suspect it could be Lupin. It wasn’t an easy journey to finally have confirmation of the allergy but dedicated perseverance and a shipment from Australia later and she has the answer.

Special thanks to my friend Jane for the inspiration for this blog post and good luck avoiding this hidden little nasty. Does anyone else out there have Lupin allergy? How did you discover it? It’s pretty rare so far in the UK so there won’t be many of you. If you have peanut allergy, like I do also, should we be avoiding Lupin too? Perhaps people with peanut allergy should be tested also for the rest of the legume family to be on the safe side – at the moment this isn’t happening, especially since this is a little known allergy on these shores.

Kidney bean allergy? What the legume is that all about?

Allergy lessons learnt from a holiday in Portugal