In a previous post, Gluten free beer is here! in May 2009, I explored the market and discussed the different brands available. Since writing this post I’ve been experimenting with reintroducing wheat and gluten back into my diet, since tests proved that I didn’t have an allergy. This experiment was incredibly successful and I can now eat bread and drink real ale – what a treat! 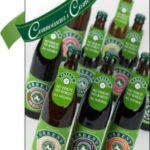 However not everyone is as lucky as me and able to experiment and try different beers. If you are a coeliac you can’t eat any gluten whatsoever so luckily there are now a number of very tasty gluten free beers on the market.

Some beer definitely sometimes gives me mild discomfort, whilst others, in moderation of course, are absolutely fine. From now on I shall try to make a note of which are the offenders, but I began to wonder what this meant – why would some beer be perfectly safe, whilst others would make me react? Could the brewing process and different ingredients used to make beer mean that some varieties are much purer, contain less gluten and are better for the body? How many chemicals are used in the process of brewing? Could these cause problems too?

A recent article this year on the Foods Matter website entitled: “Gluten-free beer 2011. How is it made? How is its gluten content tested? And is it really safe for coeliacs?” is a fascinating read. Sue Cane investigates the brewing process and discusses how little or how much gluten can remain present in beer. There is also detailed information about the testing process for food and drink that ascertains the levels of gluten present for safe consumption by coeliacs.

The article concludes that it’s probably not worth the risk for coelics of drinking beer unless it’s gluten free as the levels present in different brands and types of beer can vary quite drastically. Given the complexity of the lab based tests required it’s too dangerous to chance it. So coelics beware. Stick to the gluten free brands, some of which are really quite tasty – but sadly rarely available in pubs.

On their website Camra (The Campaign for Real Ale) states that “all real ale contains at least some gluten..” but it seems that there isn’t a documented list of suppliers who are low in gluten, nor are brewers required to test for and list the gluten content of their beer. Now wouldn’t that be a novel idea? I wonder if some of the main stream varieties would be OK for coeliacs?

They also have a pretty concise list of all the gluten free beer suppliers including: Hambleton Ales, Greens, St Peters G-free and Against the Grain. Check out their website here: www.camra.org.uk.

Camra also mention two other gluten free beers from overseas: Guinness and SABMiller. Bottled Guinness brewed in Nigeria which is brewed using sorghum and is thus gluten free; supplies of Nigerian Guinness (somewhat stronger than the “normal” Guinness) are sometimes available in the UK. SABMiller produces Eagle beer in Uganda which is brewed using sorghum but sadly it’s not currently available on the UK market.

During my trawling the web I discovered The Gluten Free Blog. An article on their website called Is beer gluten free? discusses whether real ale is really gluten free. There are some who claim that there can’t be any gluten left in beer after the brewing process so it must be gluten free, however tests prove that beer does indeed contain varying levels of gluten, which would make a coeliac sufferer very ill.

Has anyone tried this? If you are coeliac or wheat allergic and you have suffered a reaction from normal real ale or lager is it always the case? Are some beers OK? Is there a list of real ale with the gluten levels listed on the label? I’d love to hear from you all.

Will there be gluten free beer at the Great British Beer Festival?

The day after the beer festival with a wheat allergy