If you have eczema then you’ve probably used Aqueous cream in the past; you may even still be using it as it’s still on the market as a moisturiser for dry skin conditions. Most doctors prescribed it as the first moisturiser to try if a patient displayed with signs of eczema; one of the main reasons being that it’s cheap! So, I was shocked to learn from Dr Adam Fox, Allergy specialist at Guys and St Thomas’s hospital in London that it’s actually bad for eczema. He gave a fascinating talk entitled “Hay fever and allergic rhinitis – state of the art solutions” at the Allergy and Gluten Free show in London last month, where he shared loads of useful new breakthroughs, but this one stuck in my mind. 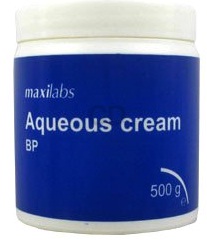 However, acqeous cream is not quite what it seems. It has been found to actually make eczematous skin worse due to the harsh surfactants it contains.

A study, led by Tsang & Guy, at the University of Bath called, “Effect of Aqueous Cream BP on human stratum corneum in vivo”, investigated whether aqueous cream had a good of bad effect on the skin of people without atopic dermatitis.

The study was published in the British Journal of Dermatology in May 2011, where the article, “The effect of Aqueous cream BP on the skin barrier in volunteers with no previous history of atopic dermatitis” examines the results of the study with interesting conclusions.

Here is an abstract of the article, unfortunately you can’t read the whole thing without subscription to the journal.

Background:? The emollient Aqueous cream is frequently used for the treatment of atopic dermatitis (AD), yet it is associated with a high rate of adverse cutaneous reactions. It contains the harsh anionic surfactant sodium lauryl sulphate, a known negative environmental factor associated with the exacerbation of AD.

Objectives:? To investigate the effect of Aqueous cream on stratum corneum (SC) integrity and skin barrier function in volunteers with a predisposition to a defective skin barrier.

Methods:? Thirteen volunteers with a previous history of AD (no symptoms for 6 months) applied Aqueous cream BP twice daily to the volar side of one forearm for 4 weeks. The other forearm was left untreated as a control. Permeability barrier function and SC integrity were determined before and after treatment by measuring transepidermal water loss (TEWL) in conjunction with tape-stripping. For comparison thirteen volunteers with current AD were recruited for assessment, without treatment, of SC integrity and skin barrier function at unaffected sites.

Results:? Topical application of Aqueous cream resulted in significant elevation of baseline TEWL and a concomitant decrease in SC integrity. Measurements made after no treatment in volunteers with current AD, at unaffected sites, suggest that application of Aqueous cream negatively affects the skin barrier towards the damaged state associated with onset of flares of the disease.

Basically, the results showed that even for people without any previous history of skin problems, acqueous cream thinned the skin, caused significant loss of moisture and damaged even the skin of the healthy participants of the study.

I was amazed to hear this, and to read on the internet more proof that it’s really bad for dry skin. 50% of people with eczema who try it say it irritates their skin so doctors should not be prescribing it anymore. It certainly made mine worse and I stopped using it years ago. If you are still using it and your skin isn’t great, question whether the aqueous cream might be the problem. Go back to your doctor and demand a different moisturiser to try and throw out the old tub straight away.

Apparently it’s not new news. The National Eczema Society had this to say on their website, “Why is Aqueous Cream bad for eczema?”

The Daily Mail ran an article entitled, “The cure with a sting: Eczema cream meant to soothe ‘makes skin WORSE” which puts the blame on the Sodium Lauryl Sulphate in the Aqueous cream. It also has some interesting comments from web readers who recommend Aveeno which does not contain any Sodium Lauryl Sulphate and is super moisturising; I know because I’ve tried this moisturiser on the recommendation of my sister.

Aqueous cream never worked for my skin, I persevered with it for years, but when my skin continued to be dry and I kept suffering from flare-ups my doctor changed my prescription to other moisturisers. I have now settled with Epaderm and Diprobase as my main moisturisers.

I would question whether the Sodium Lauryl Sulphate is the culprit here as I use Epaderm without any problems and on investigation, I discovered that it too contains Sodium Lauryl Sulphate. Just do a google search for the dangers of Sodium Lauryl Sulphate (SLS) and it doesn’t make pleasant bed time reading. Diprobase appears not to contain SLS but it does contain other ‘ium’ and ‘ate’ type ingredients which I don’t quite understand or identify as natural.

So should I still be using Epaderm? Or should I stop using that too? Even though it isn’t irritating me? Now I’ve looked into SLS on the internet I’m not sure I want to be using it anymore… Confused? How can our doctors, who are supposed to be experts in these matters be prescribing these products?

Top 15 things NOT to put on your skin