The massive popularity of central London’s TotallySwedish store, has prompted the launch of a second TotallySwedish in High Street, Barnes in West London: “I’ve been running the shop in Crawford Street in the West End of London since September 2005″, says owner Annethe Nathan, “and the business has been going very well and it’s so popular, we’ve decided to expand and open a new store”.

TotallySwedish sells Swedish food and gifts and attracts London-based Swedes, locals and tourists, as the first shop is near both the Swedish Embassy and the Swedish Church. “Barnes is also a very Swedish area” explains Annethe, “the Swedish School is situated here and many Swedish families live in the area.” 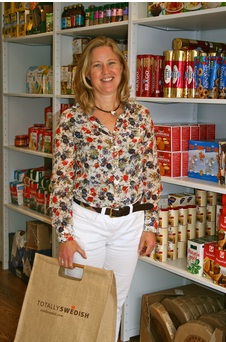 “We also have a freezer section where we sell meatballs from Scan and moose meat. We have a long-standing experience of what foods UK-based Swedes miss from home” notes Annethe. “Due to consumer demand we have also expanded our section for milk-free and gluten-free products, and we now sell gluten-free bread mixes from Semper and Mixwell, gluten-free crisp breads from Semper, and frozen gluten-free and milk-free breads, cinnamon buns and chocolate cakes from Fria”.

Annethe grew up in Mönsterås in Sweden. At the age of 22 she moved to Switzerland to study Hotel Management and in 1995 she relocated to London and worked in hotel management and IT before she started TotallySwedish.

TotallySwedish’s stores may be based in London, but thanks to the online store they deliver Swedish food daily to customers all over the UK.

“It’s fun to be part of introducing Swedish food traditions to the Brits. Swedish food is trendy here and that’s noticeable among our customer base, as an increasing number of Brits shop in our stores” concludes Annethe.

So has anyone tried out this store yet? Does anyone live nearby and is going to? Good luck Annethe! I wish I lived nearer as I love Swedish food too. Having meatballs for tea tonight!