Anyone who has asthma may be familiar with the invitation for a flu vaccine. If you are higher risk, ie. the elderly, unwell or people who have asthma or breathing problems there is a chance of complications if you do catch flu. Over the years I have had many flu jabs and haven’t actually had flu since I was a small child. I don’t tend to get colds ever (oh the irony, I will probably get one now, the mother of all colds) and am rarely ill, if you discount random allergic reactions.
So I popped in to see if I could make an appointment to have my flu shot last week. 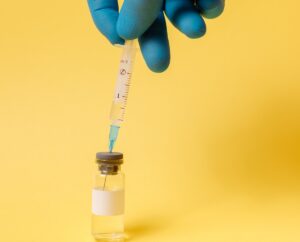 The nurse had checked beforehand that the injection was latex free.

Brilliant! I was impressed that she had checked, I know about the risk for those with an egg allergy but wouldn’t have thought latex was present in a vaccine.

If you have an egg allergy you can read about flu vaccines on the BSACI website.

However I didn’t have the injection in the end because a further check into the sheath the vaccine needle was held inside revealed that it contained rubber latex protein.

Me too and it’s also potentially dangerous; an obviously conscientious nurse, who checked the ingredients, could have made a mistake purely because she hadn’t asked the right questions.

Why make a latex free vaccine and communicate this as if it’s a good thing and then store the needle in a rubber latex sheath?

I’m guessing it’s the cheapest and most useful material to use for the sheath but it should be clearly labelled.

And if someone phones from a surgery asking if the vaccine is latex free the suppliers should reasonably deduce that the reason for this phone call is that the patient has a latex allergy.

To not volunteer the information that the sheath contains latex in the first place is crazy. What if I had had the injection and had a reaction? I was on my bicycle that day and we all know what exercise can do to me when I have been exposed to my allergens.

So a warning really, don’t have any vaccine unless you have checked what the needle is stored in.

Though I have to say, I have never had any reactions after having vaccines or flu jabs of any kind, apart from that horrible dead arm feeling and sometimes mild symptoms of flu which is quite normal.

If you have a latex allergy check out the Latex Allergy Support Group website. They have a list of the vaccines which are latex free.

Looks like there are options out there but do I even really need it? My surgery said they would look into it and even though my asthma is well controlled they would prefer it if I did have the vaccine. I will forward them this list as it might help them narrow down a possible source, though one option is going to hospital to have it. I really don’t have the time or inclination to go that far just for the flu jab. It usually takes seconds down the local surgery.

Does anyone else out there with asthma have the flu jab?
Anyone else with a latex allergy who either has had the jab, had a reaction to it or decided not to bother with the risk from latex.

Covid-19 vaccine, anxiety and my skin