Today I thought I’d share a bit of food fact fun. Did you know that Bird’s Custard, first invented way back in 1837 by Alfred Bird, came about because his wife could not eat the traditional custard which was made with eggs because she had an egg allergy? Useless fact number one, you never know when that might come up at the pub quiz. Over the years the company has been taken over a few times and is now owned by Kraft Foods. 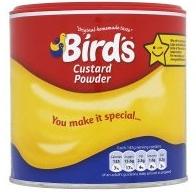 It would seem allergies are not so new, and innovative freefrom foods were being invented as far back as the nineteenth century. Go Alfred! We use Bird’s custard with dairy free milk and it works brilliantly. People like Alfred, and all the clever inventors who entered the Freefrom Food Awards this year are transforming the lives of those with allergies.

Custard powder is made from corn flour or corn starch which thickens when mixed with milk and heated.

Ingredients: Cornflour, Salt, Colour (Annatto), Flavouring. Whenever I see ingredients like flavouring, spices or some other vague umbrella term alarm bells ring. What kind of flavouring? From the taste of custard I’d say it’s probably vanilla.

(Ed. Dec 2012) Premier Foods have finally responded, some many months after contacting them to confirm the flavouring is almond, so if you have an almond allergy perhaps steer clear of this product. I have a peanut allergy but can eat this custard without any problems. Interestingly it isn’t labelled as containing nuts, even though almond is considered a nut. I’ve askd them to clarify whether the flavouring would in fact contain any almond protein or actually almond, or just be an artificial flavour. More to follow.

I believe that this custard, as well as being egg free, is also dairy, wheat and gluten free. I’m waiting to hear back from Kraft about this, though I have heard that they are very good at labelling their foods.

The perfect comfort, feel good food. It means people with egg and dairy allergy or intolerance need not miss out on the custard with their crumble. As long as it’s made with plant milk that is.

Any custard lovers out there?

Am I allergic to almonds?