One of my favourite treats on a cold miserable day is to cook cake-in-a-mug, which is quick, easy and tasty. You may have seen previous posts about this, both a normal version with plain flour and a gluten free version.

I wanted to share with you a new amazing new flour that I’ve just discovered because it added a real zing to this clever, quick, cake treat. Today I made cake-in-a-mug with a twist – I added 1 tablespoon of mesquite (pronounced mes-keet) flour, which is a naturally gluten free flour and adds great flavour and a real kick to any meal from cakes to meat. It tastes kind of like a combination of chocolate, coconut and cinnamon.

First things first, you can check out a great recipe for gluten free cake-in-a-mug in a previous blog post on this blog, Gluten Free Cake-in-a-mug!. 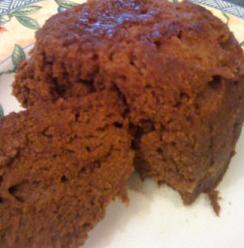 It’s quite a versatile recipe. I’ve tried it with various different gluten free flour mixes, and plain flour. Today it worked great with 2 tbsp of rice flour, 1 tbsp of maize and 1 tbsp of potato flour.

Just to explain, I’m not coeliac, nor allergic to wheat or gluten, but it does cause me lots of problems with bloating if I eat too much, so in the past I have cut it out with good results. However I feel that eating some wheat from time to time is healthier and safer for me than to cut out something which just causes minor irritation. I don’t want to cause more problems in the future, as I have done by cutting out dairy completely, which caused me to go from a mild allergy to anaphylactic reactions.

Enough of that though, I would recommend anyone who eats gluten free, and in fact anyone who likes cooking with interesting new ingredients, to try some mesquite flour. It comes from the mesquite tree, which is a hardy fast growing tree which grows well in hot, dry countries where other trees don’t grow well.

“It has a sweet, chocolatey taste and contains plenty of fibre, along with significant levels of protein, lysine, potassium and zinc with a low GI of 25. It’s a 100% natural unprocessed product made from the dried pods of the Argentinian mesquite tree (prosopis alba). It’s used widely in America as a seasoning and flavouring and works really well in cookies and cakes to add flavour, colour and aroma to sometimes bland gluten-free foods. As a BBQ spice rub or marinade it is exceptional. It is also quoted as going very well with Caribbean, Mexican and Asian foods. It can be quite a strong flavour so use in small amounts to bring out a unique and wonderful taste and aroma which is guaranteed to get people talking.

Around 10-20% for gluten free baking is considered the best proportion, although this will vary according to the taste of the individual.”

I haven’t seen it in the shops yet but surely it’s only a matter of time. I bought mine from The Mesquite Company who sell flour, flooring and furniture made from mesquite tree.

Last weekend I also made Freedom Cookies (also gluten free) with mesquite flour added, and they were delicious. Not quite good enough to photograph so fingers crossed for next time. Has anyone else tried this new flour? Anyone else tempted? Please share your mesquite moments!