Our week in Portugal was not quite what we had planned. The weather was overcast and rainy but we did have some days with amazing weather, travelled around and took in the sights, managed to eat out on a few occasions and found lots of things in the local supermarkets which were suitable. I also learnt a great deal which could be useful for anyone travelling with allergies.

1. You CAN get hayfever on holiday!
Lesson one was a hard one. Why I thought I wouldn’t need to worry about hay fever in Europe I’m not sure, but my hay fever was actually far worse in Portugal than it was before I left England. Armed with tissues and anti-histamines I was well prepared but I’ve never done any more than this to manage the condition. I was bunged up, my eyes were streaming, my face and neck were red, angry and itchy and my asthma was worse. I don’t normally get hay fever that badly. At the Allergy and Gluten free show earlier this month I discovered various natural saline nasal sprays which help to clear the airways as well as other tips such as washing your face after being outside, changing clothes and showering after going out. 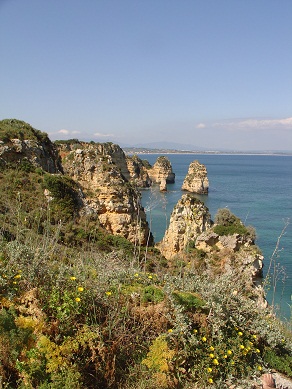 These things might have been really useful had I known before I left. I do now have a nasal spray to try but as yet haven’t plucked up the courage to spray in anger. I’m pleased to report that my hay fever is now under control and morning runs have resumed with only minor discomfort so the spray is not required – yet!

2. Eating out is harder at a non English speaking restaurant
Even with the allergy cards waiters were prone to cast a cursory glance, and then wave hands exclaiming that of course everything would be OK. Producing the EpiPen didn’t seem to impress much either but sticking to simple grilled fish and steak on the two occasions we ate out seemed to work. On one occasion we were told “Is no possible” when asking for a simple salad for lunch – I think it was my producing the allergy translation cards. I think it puts the fear of god into some patrons but I would actually rather be dismissed than fobbed off and not taken seriously by staff who don’t really understand. We did find a couple of English speaking restaurants where eating out was actually a pleasure. I was able to engage the chef in a meaningful conversation and all my fears were put to rest. Nothing was too much trouble and they even did me a delicious special sauce for my fish.

3. Watch out for salted Lupin seeds
In bars beer and drinks are often served with ‘tremecos’, which are actually salted lupin seeds, or ‘amendoins’ which is the word for peanuts. If you have a peanut allergy or lupin allergy obviously these should be avoided, but if you had a lupin allergy you might not even know what the seeds look like so be careful.

4. Steak and butter!
When ordering steak, make sure they don’t butter it. This is often common practice in France and I’m sure it does make the steak taste delicious, but if you have a dairy allergy it’s not really great. The steak, once ordered dairy free, still came with a bowl of butter so it could be buttered should I chose to do so! It also came with a separate bowl of coffee butter. I really don’t get that and obviously didn’t try it, but perhaps it tasted really good with steak… I’m not convinced on that one.

5. Supermarkets get the thumbs up!
Even the little stores had a good selection of foods that were allergy friendly. We tended to stick to fish, meat and vegetables but everything was labelled with ‘contem: lupin etc.’ I was actually pleasantly suprised by the range and breadth of foods available. Every supermarket had Alpro margerine spread, Soya, rice and even oat milk in some cases. Food was very well labelled and some of the larger stores even had a dedicated gluten free area.

6. Liqueurs are not always what they seem
We were often being offered a liqueur in bars and after a meal. A nice end to a day you might feel, but watch out. Amarguinha is a Portuguese almond liqueur and Medronho is a strong strawberry liqueur. It is often just handed over without any explanation so do always check what it’s made from.

7. Stock up on steriods – you might need them!
I thought I was well prepared, but I hadn’t taken any topical or oral steroids with me since my skin is pretty well under control now and I don’t like to use them. However, if you suffer a flare up whilst on holiday and you can’t knock it on the head with steriods, it can put a real dampner on things. Even if you don’t use them it’s really well worth taking a supply with you. You never know what might set you off; bed linen washed in the wrong washing powder, different water, just the stress of going away. Better to be prepared.

8. Airlines can be really helpful
I told my airline that I had a nut allergy before travelling, on checkin and when we boarded the plane. They didn’t serve any peanuts and they also announced that a nut allergic passenger was on the flight and asked others not to eat any nuts they may have brought with them. All was fine and I was very grateful to them for their support.

I hope you find this useful, interesting and encouraging. Please share your holiday allergy stories, both good and bad. I’d love to hear about them. Have you been to Portugal and how did you find it?

What is lupin allergy?